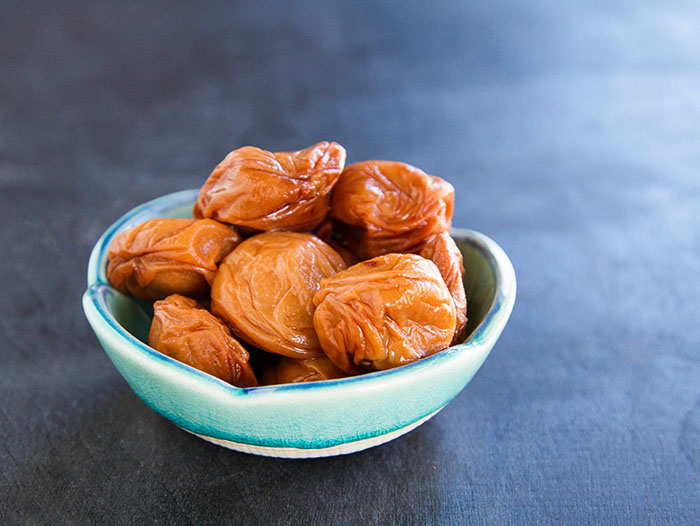 The Japanese do incredible things with fruits and vegetables.  From braising to deep frying, and drying to pickling, there are hundreds of ways to use and transform a wide variety of plants.  A particular favorite at our house are umeboshi, Japanese pickled plums (usually translated as plum, though they are actually made from a species of apricot).  Salty and incredibly sour, they are made using the process of lactic acid fermentation, one of the most ubiquitous forms of preserving food.  In fact, my favorite pickled cucumber, half sours, are made using the same process!  Lactic refers to a species of bacteria called Lactobacillus, which is present on the surface of plants, along with other types of bacteria.  Lactobacillus can convert sugars into lactic acid which is a natural preservative that inhibits the growth of harmful bacteria.  This fermentation process also increases or preserves the vitamin and enzyme levels of the items being fermented, as well as the digestability, all of which have been studied extensively for possibly contributing to good health.  There are many variations on method throughout Japan when making umeboshi, but they are all based on this lacto-fermentation process.

The plums are usually picked around the end of June in Japan, when they are still green, but not when they are still too hard.  Timing is everything if you want to be able to transform them!  They have to have developed enough sugar, but not too much, to properly transform into umeboshi with the right texture and flavor.  After we moved back to the US from Japan, I heard stories of people finding ume ready for pickling at local Asian markets.  Each year I would call the markets nearest me, but to no avail.  No one seemed to carry them in Southern California.  Fast forward to last year when I was having a conversation on Twitter about not being able to find any and my friend Kenny, my persimmon supplier, saw the conversation and casually mentioned that he had ume trees (plum trees) laden with fruit that were ready to be picked.  A few days later a heavy box of fruit appeared on my doorstep. 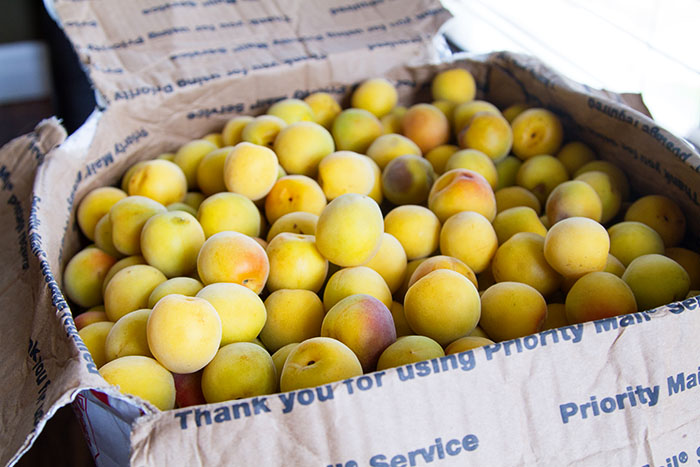 I immediately got to work, not wanting to risk the plums beginning to ripen.  I carefully sorted through them, making sure not to use any that had broken skin or were bruised.  Then I washed them and soaked them overnight in cool filtered water, to remove bitterness. 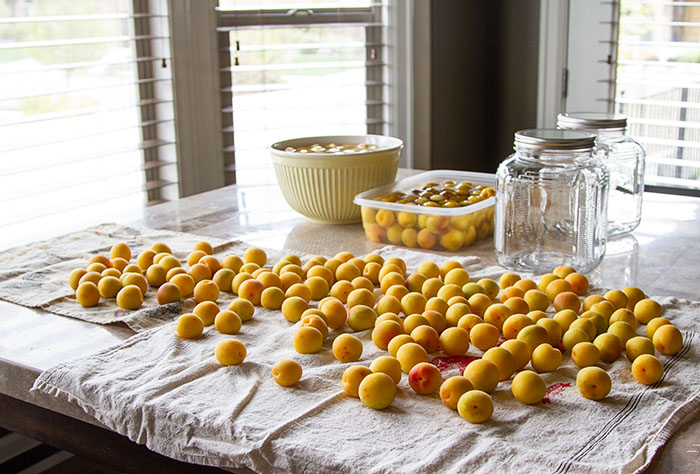 The next morning, using a toothpick, I carefully popped the stem out of each plum, then wiped them dry. 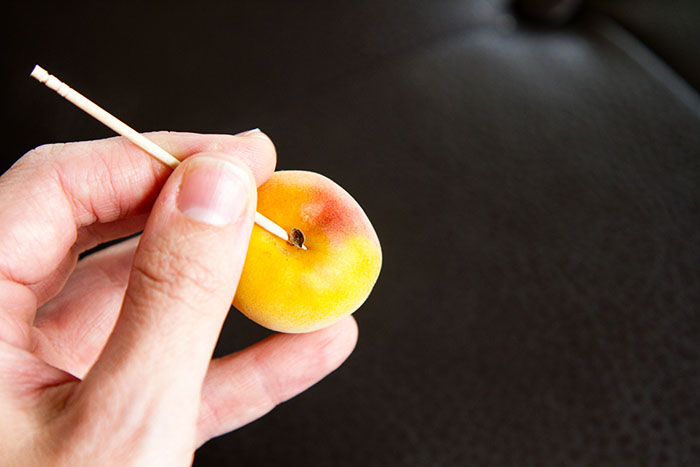 I put the plums into bowls, sprinkled them with a bit of vodka (in Japan they use shochu, but any distilled alcohol will work), and mixed them with my hands.  Then I wiped the sterilized containers I would be pickling the plums in (ceramic or glass) with a paper towel moistened with the alcohol as well.  The alcohol is used to further sterilize the surfaces of both the container and the fruit, helping prevent the growth of unwanted bacteria.  With the fermentation process this alcohol, along with the juices that come from the plums and salt that is added, is slowly turned into the most amazing ume vinegar.  Next I weighed all of my fruit to determine how much sea salt I would need to use in the pickling process. 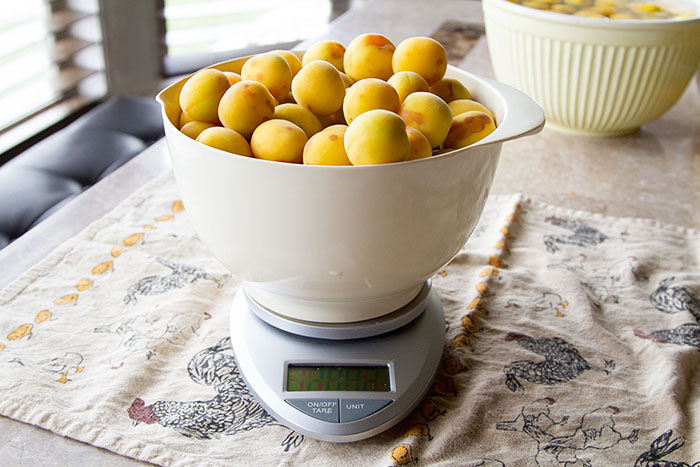 Traditionally the salt perecentage usually falls somewhere between 12 and 20%, though in earlier times there were umeboshi with a salt content of over 25%.  There are also sweeter varieties available that have less than 12% salt.  I had participated in making umeboshi several times in the past while living in Japan, but this was my first solo-foray into the process, so I decided to play it safe and go with 20% salt.  I had 12.5 pounds of fruit, so I ended up using 2.5 pounds of coarse sea salt.  Umeboshi made with higher salt percentages are less prone to mold—better for less experienced picklers.  Using my hands I covered the plums with some salt, then began to layer them in my pickling containers, sprinkling each layer with additional salt as I went.  The salt draws out the juice from the plums and begins the pickling process. 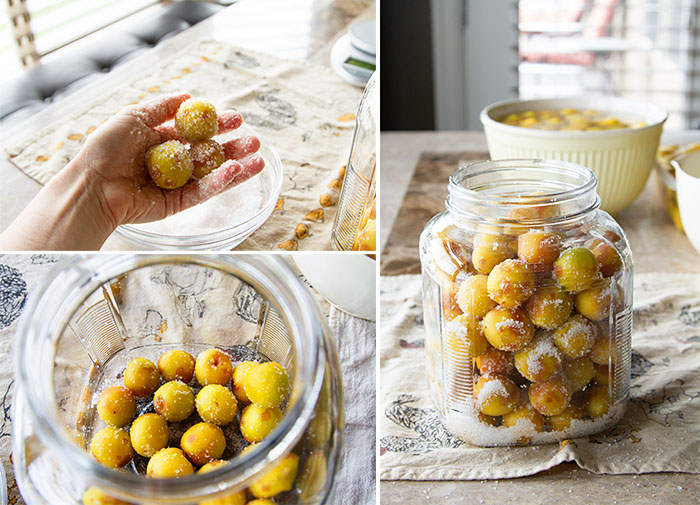 I then put a layer of plastic wrap over the top to cover the plums completely, and placed a weight on top of them.  As their liquid is drawn out they are eventually submerged in it and the weight keeps the plums below the surface of the liquid.  Air is an invitation for mold growth, so this process is a further step taken to inhibit the growth of the wrong type of bacteria.  I kept the plums in a cool, dark place for about 5 days, gently shaking the containers about once a day to help the plums settle as they shrank due to their juices being drawn out by the salt.  At this point salted red shiso leaves are often added to contribute color and flavor.  I didn’t have access to any, so I didn’t add them.  I let the fermenting plums sit in their containers weighted down in that same cool dark place, unbothered for a month to continuing fermenting. 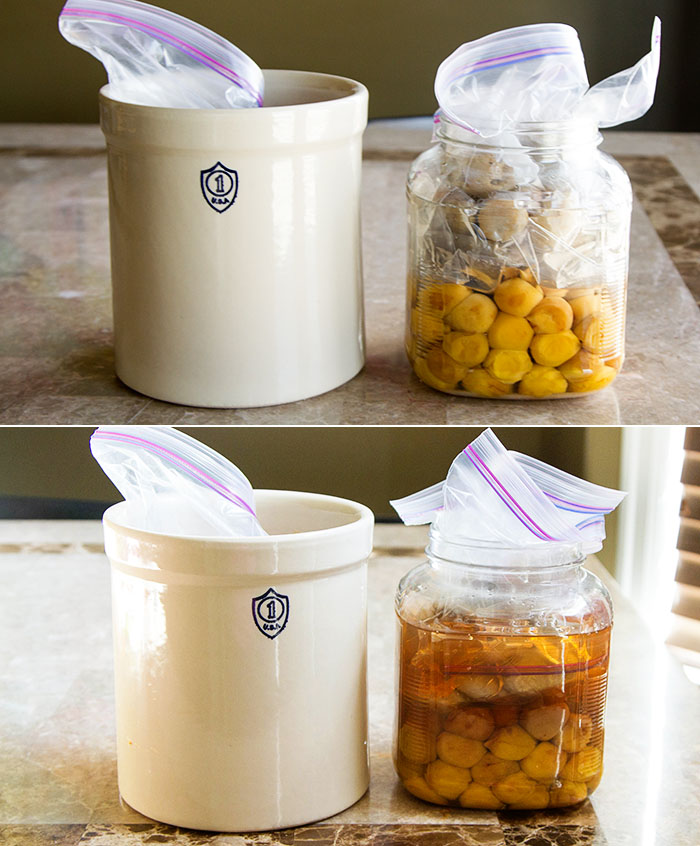 After the month was over I removed them from their liquid and layed them out on parchment paper in roasting trays topped with netting to keep any curious bugs out and let them dry outside in the sun for 3 days and 3 nights, taking advantage of the strong July sunshine, making sure to turn them each day so that they would dry evenly.  We had a small rainstorm one day, so I had to rush outside and bring them in before they got wet.  This also meant an extra day outside so they could properly sundry.  Although this drying step isn’t necessary to complete the lacto-fermentation process, most methods I have looked at include it because it increases the life of the umeboshi and enhances their flavor and enhances their color, helping them to turn a lovely rose color.  When they have finished their drying process they have changed from orangey yellow to a shade of rosy peach and are shriveled and wrinkley, with evidence of the salty liquid they were pickled in dried on their surfaces.

After their three days of sunshine, they are returned to the pickling liquid, while still warm, sealed with a lid (but without weights) and left to continue fermenting as the plums are reconstituted in the liquid.  I let mine continue maturing four about a month in a cool dark place (i.e., the back of a shelf in my pantry) before we opened the jars up to taste one.  At this point I transferred the jars to the refrigerator, where they will easily keep for a year, but really almost indefinitely. 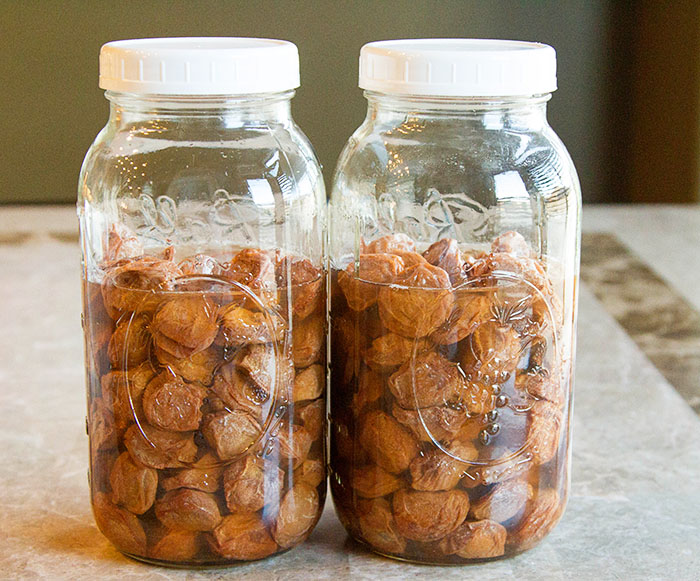 The umeboshi then are ready to be eaten.  In my house they usually end up being popped straight into Squirrel’s mouth (she loves their strong sour flavor), or having their pits removed and used as a filling in onigiri.  They can also be mashed into a paste to be included in salad dressings and sauces.    The pickling liquid, which is now umeboshi vinegar, or ume-su as it’s called in Japanese, is a fabulous flavorful vinegar that I love using in vinaigrettes. 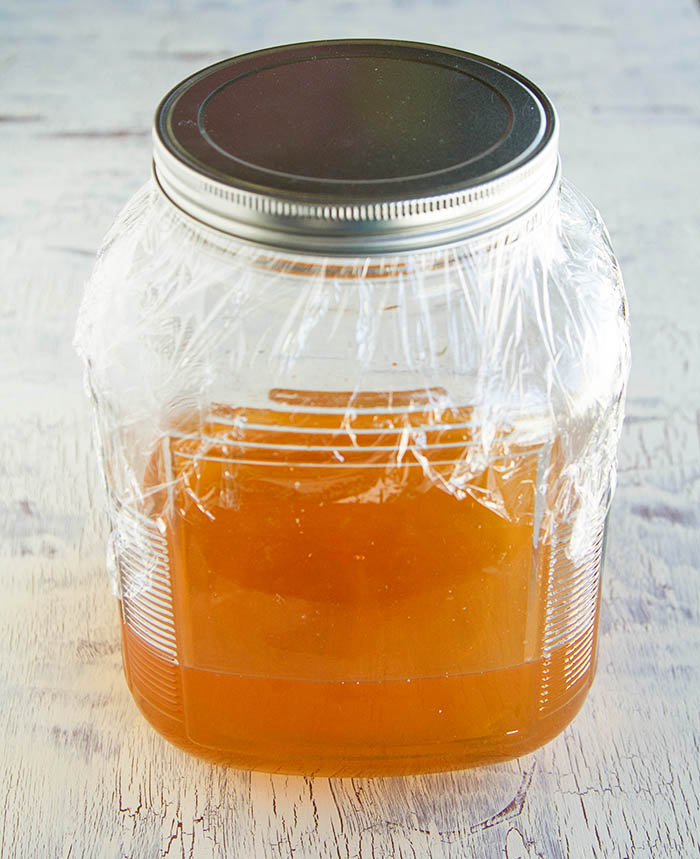 Making umeboshi is a labor of love.  Believe me.  They take an investment of time and patience.  But if you are willing, you will be rewarded with your own homemade sour plums that will taste even better than storebought because they will have been made with love (and without any unnecessary ingredients, like high fructose corn syrup)—a wonderful way to enjoy these summer fruits all year round. 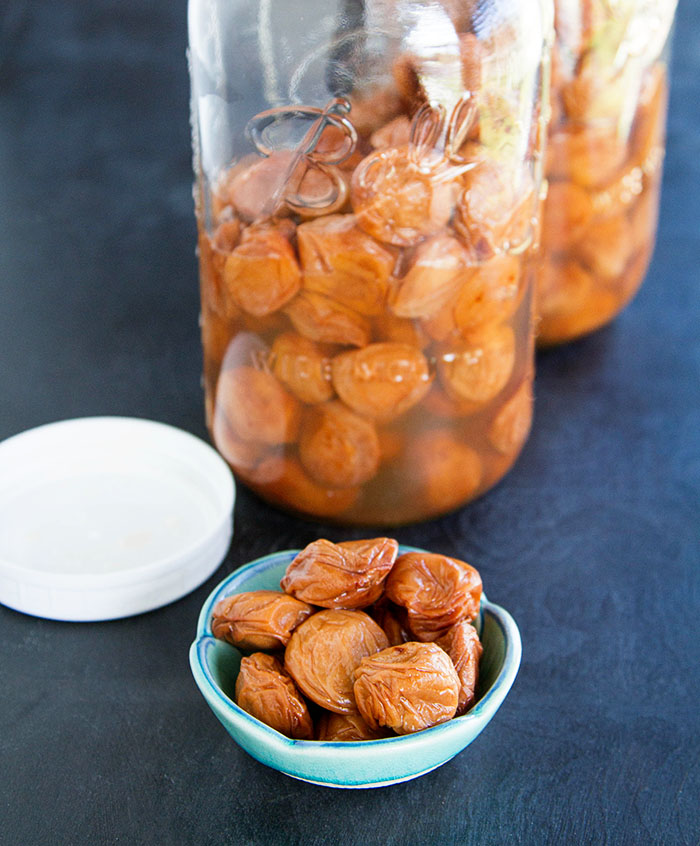